The Patriots running attack cut through defenses like a knife cuts mash potatoes. Look what they did to the poor Chargers in the 2nd round. It wasn’t even fair. The Chargers chose speed on defense and Belichick countered with size and pounded the ball through the teeth of Gus Bradley’s defense. This was the same defense that held the Ravens to 0 yards through 3 quarters in the 1st round. Leave it to Belichick to go old school. The new NFL blueprint has been through the air with quarterbacks snapping it downfield to playmakers.  Belichick has two weapons on the ground that can just ruin your day because if you aren’t careful Tom Brady can still zip the ball with a velocity at 40. With the exception of the Jets and Browns, all of these teams were playoff teams last year. The Jets and Browns both made significant pickups this offseason to bolster the running game. We’ll see if they share the same fate as the rest of the teams on this list.

Melvin Gordon, when on the field, is a nightmare in between the tackles but if he gets in the open field it’s over. He just needs to stay healthy for a full season. This makes Austin Ekeler that much more valuable in case Gordon goes down to an injury. Ekeler would have it the 1,000 scrimmage yards last season if he hadn’t missed a few games late in the season. When healthy, these two can light up a stat sheet and get into the end zone on the regular from any yard line on the field. Home run speed whenever they get the ball.

James White is perfect for the Patriots and the Patriots are perfect for James White. White had 87 Receptions last season. Remember my last article about Beckham Jr. and Landry? Well, White had more receptions than both of them last season. 3rd and whatever just get James White the ball and most likely you’ll get good results. White and Michel are similar to Gordon and Ekeler. I would give the receiving edge to Gordon over Michel though but that doesn’t matter when the Patriots are holding up the Lombardi Trophy in February every year.

Seeing a trend here? None of these running backs carry the same running style. Usually seeing one more shifty, light on their feet style and the other a more downhill, bruising attack. Alvin Kamara has 162 Receptions in his first 2 seasons in the NFL. Dree Brees has catapulted him right into elite status out of the gates. Kamara has a little over 3,000 All-Purpose yards in just two seasons removed from College. Latavius Murray is the opposite. He’s only hit the 1,000-yard mark once back in 2015 with the Raiders. Out of the 77 career games for Murray, he has started 48 of them. That is outstanding to have a No. 2 Running Back with that much game experience.

Chris Carson is just the latest Running Back to go from late round pick to being a top RB in the league. Carson only carried the ball 49 times for 200 yards his rookie year but last season with the injury to Thomas Rawls and a slow start for Penny, Carson seized the moment running for 1,151 yards and 9 TDs. One thing that is almost certain, if you are a rookie slowed by an injury starting the season, it is almost impossible to pick up the playbook and NFL speed quick enough to make an impact. That is offensively speaking. Joey Bosa didn’t make his debut till week 4 or 5 and he finished with double-digit sacks. The Seahawks were No. 1 in all of football last year in rushing. The two RBs have drastically different styles. Carson is a monster and will run right through you on his way to the end zone, like a Bo Jackson! Perry, on the other hand, runs with finesse and breakaway speed once he gets to the second level of the defense.

Let’s hope the Jets new toy LaVeon Bell actually spent time on a field or in the gym and not just on Twitter or in the studio producing records. LaVeon Bell bet on himself in a big way and he has more to prove than anyone in the league next year. He kept arguing that he was undervalued and underappreciated in Pittsburgh. Well, he got his wish he’s out now what? When Bell has played he’s been on another level. He’s averaged 1,599 Scrimmage Yards per season. Bell’s back is very solid too. Bilal Powell has played 8 years in this league so a smaller workload is perfect for Powell. Adding that he also has 37 Starts in his 8 seasons.

The University of Georgia produces some serious “NFL-ready” RBs. Chubb was the lead back before Sony Michel at Georgia and it took him about half the season his rookie year to get it going. The reason the Browns are on this list and will have the best RB TRIO in the league as soon as Kareem Hunt is reinstated. Currently serving out a suspension which probably should have been longer. He rushed for over 1300 yards as a rookie and last year he had over 1,100 scrimmage yards and 14 total TDs in 11 weeks before being suspending. 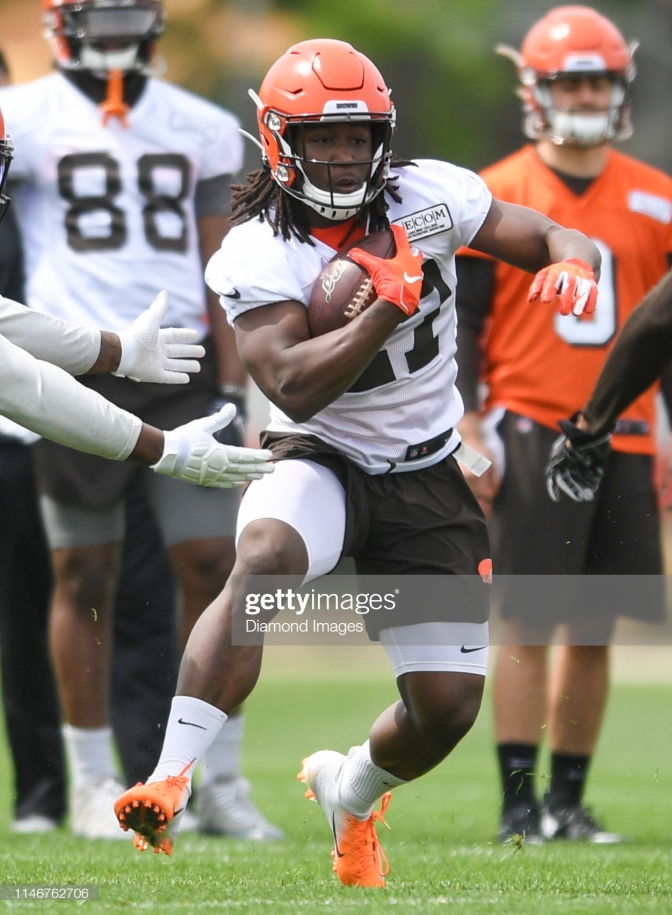 One thought on “NFL Tandems Part 2: Which 2-Headed Monster At Running Back Will Cause Nightmares?”