The 2018 rookie class has set the bar incredibly high for the following years. We have records on records on records being broken and it all starts in the Big Apple with Saquon Barkley. He’s a physical specimen and has all the tools of the former greats molded into one. He can catch, run block, has home run speed, and has feet like Barry Sanders. The way he moves laterally without losing speed is vintage Barry Sanders. BakerMania took over Cleveland in a big way, and Cleveland got free Bud Light out of it. The other team to make the right moves was the Indianapolis Colts. With two linemen to protect Luck for the next 10 years and the leading tackler last season, Darius Leonard in the 2nd round. Starting with the signal callers, we had 5 rookies starting for their teams. Something that is changing in today’s game, we never used to see rookies jump right in. The days of 1st round QBs holding clipboards for 2-3 years like Rivers and Rodgers are over. Teams like to toss them in and have them get in the mix right away.

King James is Out, King Mayfield in as Leader of Cleveland…

The Browns began the season with former pro-bowl QB Tyrod Taylor to lead the young Browns. Taylor’s job was to keep the seat warm for Baker Mayfield. Unfortunately, the legend of Baker Mayfield started with an injury to Taylor down 14 against the Jets. That marked the beginning of Bakers record-setting rookie season throwing for 27 TDs, most by any rookie QB. Baker gave Cleveland their first win in over 600 days. The guy is a legend no matter how his final stats looked. Baker is going to lift Cleveland for a very long time. Look at the rest of the division, Ben Roethlisberger is losing Antonio Brown and La’Veon Bell, most likely. Even though JuJu Smith-Schuster and James Conner are more than capable, they’re not AB and Lav Bell. The Ravens do have Lamar Jackson but Crabtree has been a major disappointment and they’re losing WR John Brown and RB Alex Collins in the offseason. Baker is poised to win right now and he showed that in year 1. 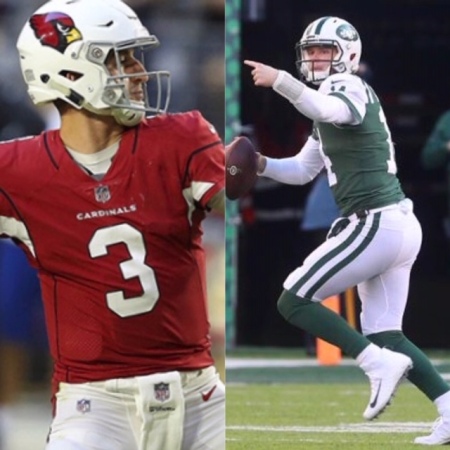 Looking at the two Southern California QBs, Sam Darnold and Josh Rosen. These were two of the more “NFL ready” QBs out of College. Darnold finished with 17 TD to 15 INT. Rosen, unfortunately, never got to get his feet wet. The Cardinals offensive line was a mess, the coaching staff was a mess, playcalling was a mess, Rosen heard footsteps almost every snap. They hired the wrong coach to lead Rosen, Steve Wilkes, is a defensive-minded head coach and never got on the same page with his coaching staff and player personnel, leading to a quick exit in the desert. When the Cardinals hired Wilkes, they probably didn’t think they would be able to land Rosen with the No. 10 overall pick. It was a mess of a season for Rosen after he began the season with Mike McCoy as the offensive coordinator, who was then fired being replaced by Byron Leftwich. Leftwich was learning how to call plays while Rosen was learning the NFL. Tough to win that way. Can’t expect Rosen to prosper in a situation like that, at least he got to learn how to be a pro from sharing a huddle with Larry Fitzgerald, who recently signed a 1 year, 11 million dollar deal. After year 1, Darnold has shown more promise, but, they won a combined 7 games all year long. Darnold was in a very similar situation to Rosen. He played for Todd Bowles, former AZ Cards Defensive Coordinator, another Defense first head coach.

Finally, we’re looking at the two dual-threat QBs, Josh Allen and Lamar Jackson. Each one of them rushing for over 600 yards. Jackson rushed for 5 TDs and Josh Allen had 8 rushing TDs. Even though these two QBs had some exciting rookie moments, they both have a very long way to go in becoming complete NFL QBs. Jackson needs to take better care of the ball fumbling it 12 times this year and only throwing for 75 yards per game. Baltimore needs to invest in some playmaking WR’s that can catch the ball down the field. That way Jackson can be more confident pushing the ball downfield. Allen only had 10 TDs to 12 INT, but, he did lead his team in Passing and Rushing this season. Jackson led his team to the playoffs in his first season, primarily with a stout defense and running game. Allen, however, was a huge surprise with his legs. The scouting report on Allen was his big arm, like Roethlisberger. Not his legs, he turned a lot of heads with his ability to run and get out of the pocket with his 8 rushing TDs.

Running Backs- Are we Witness to the Next LT and Barry Sanders in the Form of Saquon Barkley?

Saquon Barkley is built like a Mack truck with a Ferrari engine. He can run through you or around you, flat out making you look silly as a defender. His rookie season was one for the books. Rushing for over 1,300 yards with 11 rushing TDs. His receiving numbers are what separates him from everyone. He caught 91 passes for 729 yards and another 4 TD. Barkley didn’t put the ball on the ground once this year. As I mentioned he has home run speed and that is quite clear with his 7 runs of 40+ yards and 16 runs of 20+ yards. He’s going to be a star in this league for a very long time, well as long as his body will hold up because an RB has a shorter shelf life in the NFL. 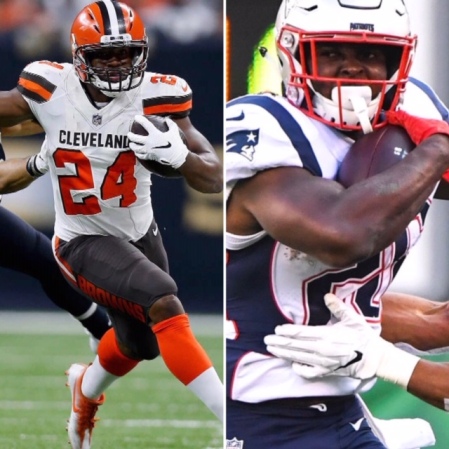 Next, we’re going to acknowledge Georgia Football as RunningBackU. Obviously, Todd Gurley is proof, but Nick Chubb and Sony Michel each ran for over 900 yards this season. Michel, playing a major role in the Patriots 6th Super Bowl Win. Ponder this for one second, all 3 of these RBs were on the Georgia Bulldogs roster in 2014. That is incredible. Georgia is starting to build a reputation as an RB powerhouse. Sony Michel squared off against Todd Gurley in the Super Bowl and got the last laugh. Michel rushed for 6 TDs in the playoffs alone, more than any other back. Well, that is because this is the first time Bill Belichick took an RB high in the draft, nabbing Michel at the end of the 1st round. Belichick wanted to showcase his brand new toy in the form of a 23-year-old power runner in Michel. Nick Chubb is apart of a rebuild and for the first time in a long time, the Cleveland Browns are probably in the best position in the AFC North. If the Browns had used him more in the first half of the season, he would have easily hit the 1,000-yard mark as a rookie. We’ll see how the acquisition of Kareem Hunt plays into Chubb’s future with the Browns. 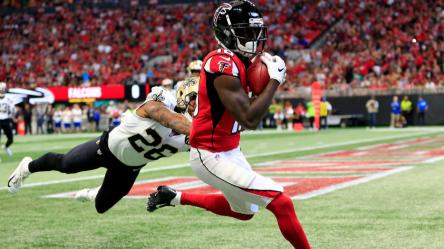 Just like Georgia producing RBs, Alabama produces WRs and the Falcons have two of them. Matt Ryan has found a new weapon, another Nick Saban product. Speed, route running, red-zone awareness, and a winning attitude. That sums up Alabama products. The latest is Calvin Ridley. In his first season with Matt Ryan, he had 821 yards receiving and 10 TDs to go along with 64 catches. Ridley’s coming out party came against Brees and the Saints, racking up 146 yards on 7 catches and 3 TDs. Julio Jones has taken him under his wing and throughout the season got better and better, especially in the red zone. 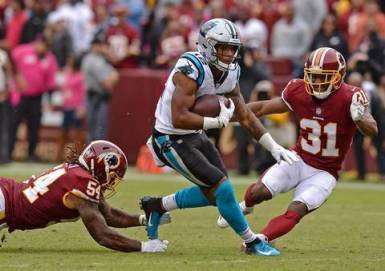 Another rookie Wideout making a name is DJ Moore, also from the NFC South. Although he didn’t put up the numbers Ridley did, he was a factor and a weapon for Cam Newton and the Panthers. He had 55 catches for 788 yards and only 2 TDs, but that number will rise in year 2. His coming out party happened against Matt Patricia and the Lions, 157 receiving yards on 7 catches and a TD. 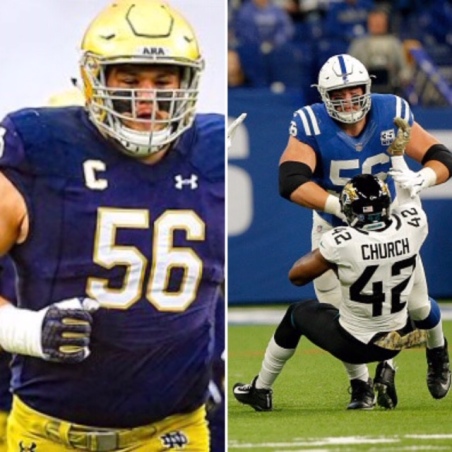 The Colts gave up the fewest sacks in the NFL last season, Quentin Nelson deserves the credit. The decision to draft Quenton Nelson was purely for Andrew Luck, and it paid off only being sacked 18 times last year. The All-American from Notre Dame was the 6th pick in the draft and earned All-Pro honors. Nelson lived up to the first round hype, punishing DL at the point of contact with regularity. He is already at the top of his class at the Guard position and will be for the next decade.