Since 1990, 49% of teams to start the season 4-3 have made the playoffs and only 17.5% of teams to start 3-4 have made the playoffs. Every season we have a team that gets hot at the right time. Some pretty talented teams have 3 and 4 losses. Do any of them have a chance to do some damage? We know the Rams, Chiefs, and Patriots are going to be relevant all season. But what about the teams on the outside looking in? The Texans look to be taking control of a very weak division. After starting 0-3 the Texans led by the circus catches of Deandre Hopkins and swag of Deshaun Watson have won 6 in a row. Plus, they just pulled off a trade with the Broncos for Demaryius Thomas. The Seahawks have also found some new life. Since the Legion of Boom was dismantled, the defense led by Earl Thomas in the secondary, have broken off 4 straight wins.

There are tons of 4 and 5 loss teams. It is safe to eliminate a good amount of these teams right off the bat. The Jets and Bills are both sitting at 3-5. Barring a miracle, these two teams led by two rookie QBs are still a few years away from being relevant. Andrew Luck and the Colts don’t have enough weapons right now and the Browns just cleaned house on their coaching staff. At least they have two wins and a tie, solid improvement. The Broncos might have a head coaching vacancy soon so we can eliminate the Broncos at 3-5. The entire NFC North is very interesting, Packers and Vikings both 4-3-1 while the Bears are standing at the top at 4-3. Matt Stafford and the Lions are a game behind at 3-4. That outcome is anyone’s guess, I would lean towards the Packers and Aaron Rodgers in that one. The next few teams are my primary teams that have the personnel to break some hearts late in the season. 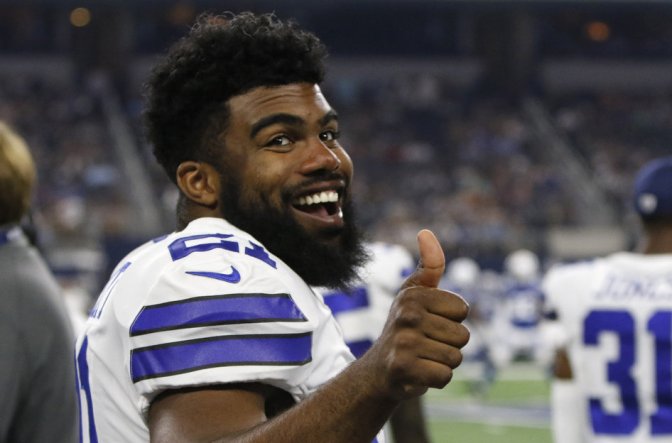 Take out the week 8 collapse, the Ravens had the scariest defense in the NFL. They still only give up 17.1 points per game. Terrel Suggs and Eric Weddle have carried on the legacy left by Ray Lewis and Ed Reed. With a Super Bowl quarterback, Joe Flacco, the Ravens have no reason to hang their heads on that blowout loss against the Panthers. This team will be in the mix in December. Ravens have a very hard remaining schedule. Playing the Chargers, Chiefs in Arrowhead, Panthers, Falcons, Bengals, and Steelers.

Leave it to Jerry Jones to make the biggest acquisition mid-season when the Cowboys gave up a 1st round pick for former pro-bowl WR Amari Cooper from the Raiders. In a weak division, the Cowboys can make a major push with a lot of games left to turn it around. Zeke Elliot is second in the NFL in rushing behind Gurley and Dak Prescott lacks a real playmaking WR, Amari fills that void. The Cowboys also have the No. 2 defense in football giving up 17.6 points per game. Scary combination brewing in Dallas, as hard as that is to accept. The Cowboys have a much easier path the rest of the way too. They do play the Eagles twice and the Saints. But they also play Titans, Falcons, and Buccs.

The Eagles also have a tough second half of the season. They still play the Cowboys, Redskins, Texans, Rams, Saints, and the pesky defense in Jacksonville. Wentz is averaging 300 yards per game but the big hole on this team is a lack of RB. Jay Ajayi tore his ACL and they lost LeGarrette Blount in the offseason. Only leaving Corey Clement on the roster from last year’s Super Bowl squad.

The Seattle Seahawks (4-3, yes I realize they have 3 losses)

The Seahawks have a very tough path for the rest of the season. Obviously, they have to take on the Rams. They also take on the Chiefs, Chargers, Packers, Panthers, and Vikings. Those teams are 25-11-2, not a lot to be happy about right here. Russell Wilson will need to make plays with his legs and needs to push the ball down-the-field more than he has been. They will rely heavily on the ground attack of Carson and Davis, who have each had 100-yard games this season.

Born and raised a sports fan in Phoenix, AZ, I received a degree in Speech Communication from the University of Arizona. In addition to being a die hard U of A sports fan,(#beardown), I was raised a very big Chargers fan; It pains me to watch them play in LA. They belong in SD!! Played football and baseball and have been talking sports my whole life. I'll talk sports to anyone willing to listen! View all posts by bigcatsports