Sports fans love October baseball and the excitement that comes with it. So much history happens during playoff baseball. In the National League right now, it feels like October baseball every single night. One loss can move you from a playoff spot to out of the playoffs. The playoffs are in full effect for about 10 teams still trying to lock up a spot at October baseball. As it stands right now the playoffs would be the Cubs, Phillies, D’Backs are atop the division and the two wildcard teams would be the Milwaukee Brewers and the LA Dodgers. But there are 5 more teams that are a 3 game winning streak away from a playoff spot. First we’re going to get into the WILDCARD teams.

Beginning with the 6 seed or the second wildcard team. If the season were to end today. The LA Dodgers are sitting at 61-50, the same exact record as the Diamondbacks in Arizona. The D’Backs owned the Dodgers early on in the season and have the better record head to head against the Dodgers so far this year so they hold the tie breaker. That was then this is now. Playoffs are on the line and the Dodgers and Diamondbacks have 7 games left against each other beginning the end of August. For right now the Dodgers have a very slim grasp on the final spot. The Dodgers went all in on Manny Machado, who is most likely a rental player. They also grabbed Brian Dozier from the Minnesota Twins. With the loss of stud SS Corey Seager, they had to pick up the slack somewhere. Still not a lock to make the playoffs. Hopefully giving up those prospects to secure Machado for half a season comes back to bite them, yeah I am a D’Backs fan stop hating. 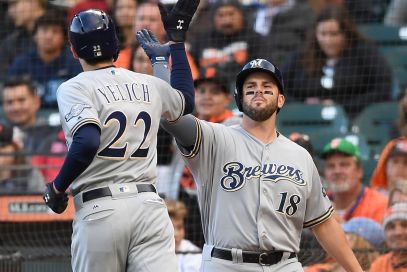 The number 4 seed, or the 1st wildcard team, are the Milwaukee Brewers. They actually have more wins than the 1st place Cubs but are in second place by 1 game because they have more losses. They’re 64-49 right now and have made a few moves to go all in trading away some pieces and are neck and neck with Chicago. It’s safe to say both of those teams are sitting in the best position right now. The Brewers had 5 representatives in the All-Star game. Jesus Aguilar, Lorenzo Cain, Josh Hader, Jeremy Jeffers, and Outfielder Christian Yelich were there 5 All-Stars. The team is balanced offensively and play great defense. Starting Pitching is the only question mark heading into October.

Moving out to the Wild, Wild West. The Arizona Diamondbacks hold the slightest of advantages over rival Dodgers. As of right now, the D’Backs and Dodgers have the same record but the D’Backs are 8-4 against the Dodgers this year. The biggest flaw in the D’Backs post season blue print is the bullpen. They were a very aggressive team with a very depleted farm system. The D’Backs had limited top 100 prospects to package in trades but they made it work. Bringing relief pitcher Brad Ziegler back, who has more appearances than any reliever in D’Backs history. Also adding Matt Andriese from the Rays, he’s a relief pitcher that can log multiple innings out of the pen giving the D’Backs a long relief option. D’Backs also brought in Jake Diekman, the hard throwing lefty from the Rangers. Offensively, the D’Backs added two HUGE pieces in John Jay, with world series experience and recently added the switch hitter Eduardo Escobar to play 3rd. The pickup of Escobar turned out to be bigger than expected when Jake Lamb elected to have shoulder surgery shutting down his season. Terry Lovullo is prime to make another run at the post season. This time hopefully they won’t be playing in the stressful wildcard game. 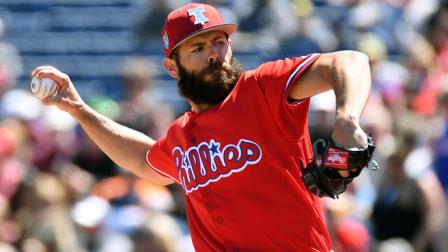 Moving out east to the NL East. The Philadelphia Phillies are sitting in first place at 61-48. So the D’Backs, the Dodgers, and the Phillies all have 61 wins. The Phillies haven’t been relevant since Cliff Lee was throwing scoreless innings in his sleep. Ryan Howard and Chase Utley are long gone now. Now they have Jake Arrieta who helped break the Cubs World Series slump. If they make the playoffs having Jake Arrieta is a serious advantage with his experience and toughness. Another huge off-season move was bringing in Carlos Santana from the Indians. Santana also has a lot of post season experience contributing to the Indians World Series Run in 2016. Santana has 16 dingers and 63 RBI’s. Moving to free agency picking up Asdrubal Cabrera from the Mets was a move that helps offensively and defensively. A Web Gem machine and adding 18 homeruns in 2018, Cabrera looks to help Philidalphia secure a playoff spot in the crowded National League.

Finally, the Chicago Cubs. The team we all used to cheer for because we felt so bad that they have gone so long without a World Series. Well, a lot has happened since that and am now looking for them to get dethroned in the division. None the less, the Cubs can put up runs in a hurry, play very good defense and have good enough pitching to make a deep post season run. The Cubs still have the core nucleus that won a World Series two years ago. Anthony Rizzo, Kris Bryant, Javier Baez, and Wilson Contreras. Of course, they also have John Lester, who’s no stranger to big time games and the spotlight. Lester is 9-7 in the post season with a 2.55 ERA. Id be happy to have a pitcher like that on my squad to take the bump game 1 of a playoff series.

Ok, so now we’ve seen the teams that are in as of now. We still have 2 months to go, but it should be safe to say that this playoff race will come down to the final week of the season. Starting in the NL East, the Atlanta Braves are only .5 games behind the Phillies. Sitting at 3rd place in the NL Central is the Pittsburgh Pirates who are 57-53 and 4 games back in the wildcard, 6 games behind the division leader Cubs. Oh lets not forget the Cardinals who are right behind the Pirates. Last time the Cardinals won the World Series they were 9 games out of the playoffs in early September. Having the Cardinals lingering around is not good for any body. The Giants, currently in the middle of a 4 game set with the D’Backs and 5 games out of 1st place. The team that is the scariest team is the Rockies who are 2 games out of 1st place in the NL West and have probably the best offensive lineup in the National League. Gold Glove 3rd basemen Nolan Arenado leads the team with 28 homeruns followed by Charlie Blackmon and Trevor Story with 21 bombs. Ian Desmond is lagging behind with 19 homers. That is a lot of power in one lineup.

The final playoff outcome is going to come down to the final week of the season. There are 10 solid teams scattered throughout the NL. A few winning streaks and losing streaks and these playoff spots will be turned around. A lot of these teams minus the Giants and Rockies made a ton of free-agency moves to get to the playoffs. We’ll see which moves paid off the most and if the patience of the Rockies paid off. Going to be a fun two months in the NL leading up to the REAL October baseball where legends are born.