Well, there is no debate on who the top QB Duo is in the NFL. Not many teams can lose their MVP caliber starting QB and have a backup pick up where he left off and lead his team to a Super Bowl victory. For Nick Foles, “No Wentz, No Problem”. That is a credit to Head Coach, Doug Pederson, who kept this team moving in the right direction. Time’s are changing and having a good 1,2 punch is becoming more common. With all the new injury concerns and concussion protocols in today’s game, having valuable options as backups are incredibly important. Having a backup with starting experience is invaluable. The 2017 world Champion Philadelphia Eagles had the best QB duo and RB duo in the NFL last year. Trading for RB Jay Ajayi early in the season to add with TD producing LeGarrette Blount was a combination that helped get Nick Foles confidence rolling and the Eagles flew from there. The Eagles 2017 roster was the blue print for a SB winning team.

Joining the Eagles is the Patriots with the G.O.A.T Tom Brady and Brian Hoyer. After that, it is a big “what-if” in terms of quarterback Duos. Anytime you have a backup QB with starting experience with 1st team reps, you have a major advantage. I’ll keep going back to the 2017 Eagles if I have to in order to make the point. Hoyer has 60 games played under his name, so if his number is called, he’ll be less likely to have a meltdown than many other backups. Now, I am not saying Brian Hoyer is a good quarterback, for backups, experience trumps talent all day long. 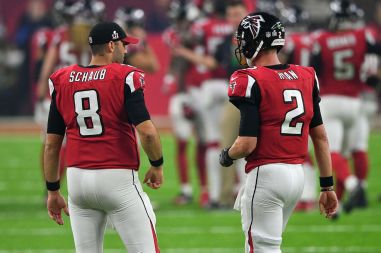 The Falcons have a nice situation going on in Atlanta. 2016 MVP Matt Ryan has long time backup and starter Matt Schaub. Schaub is the “poster” boy of reliable backups. He has 145 games under his belt, and 92 of those coming as starts. Schaub also has thrown for over 24,800 yards, 133 Touchdowns and 90 interceptions. God forbid Matt Ryan should go down, Dan Quinn has to sleep very well at night knowing he can throw in a guy with those career numbers. There isn’t a situation that Matt Schaub hasn’t seen.

Next, we’re going to breakdown a few QB Duos that could potentially have big seasons. Let’s start in the desert, with first round pick, Josh Rosen. Rosen will most likely start the season behind one time top pick Sam Bradford. We all know Bradford’s injury history but given a decent offensive line with future Hall of Famer, Larry Fitzgerald, this could be a very good duo. Not to mention, 3rd string quarterback Mike Glennon also has NFL experience, which we hardly ever see from an NFL team. Glennon was on the All-Rookie team with the Tampa Bay Buccaneers in 2013. Not bad for a 3rd string quarterback.

It’s very crazy and scary that I am even putting this team in this post. The Cleveland Browns have number 1 overall pick, Baker Mayfield, and former Ravens and Bills starter, Tyrod Taylor. Taylor was also a Pro-Bowler in 2015 throwing for over 3,000 yards and 20 Touchdowns. There could be a lot of reward here, especially with the pickup of Jarvis Landry via free agency and Josh Gordon fresh off reinstatement. If we’re talking most mobile duo, Taylor and Mayfield should be in that conversation as well.

Just like the Eagles dominate amongst QB duos, the New Orleans Saints dominate all running RB duo conversations. In 2017, Alvin Kamara and Mark Ingram were Pro-Bowlers. Kamara blew us all away in his rookie season. He was a pro-bowler and was the Offensive Rookie of the Year. Kamara had 725 yards rushing with 8 Touchdowns averaging 6.1 YPC and had an insane 81 catches for 826 yards and 5 Touchdowns. In his rookie season, Alvin Kamara had more catches than a lot of “elite” Wide Receivers. His 81 catches were more than Doug Baldwin, AJ Green, Tyreek Hill, Mike Evans, Dez Bryant, and Rob Gronkowski. Those are all former Pro-Bowlers, Kamara comes in and dominates. You add that with former Heisman trophy winner, Mark Ingram, form a pretty scary combination. Ingram was also a pro-bowler last season running for 1,124 yards and 11 Touchdowns. In this day and age in the NFL, versatile running backs out of the backfield are very crucial. Even Ingram is used more out of the backfield since his days with the Crimson Tide. 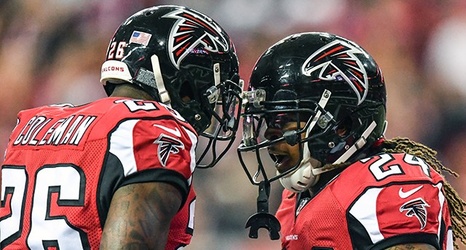 We’re going to stay in the NFC South, the Atlanta Falcons have a very scary twosome. Devonta Freeman and Tevin Coleman are two game-changing running backs that can catch out of the backfield and be used interchangeably. In 2017, Freeman ran for 865 yards and 7 Touchdowns, also contributing 36 catches for 317 yards. Coleman added in 626 yards 5 Touchdowns on the ground with 27 catches for 299 yards and 3 TD in the air. The Falcons are 2 years removed from playing in the Super Bowl. They have most of those pieces still in tact, but the hard running of Coleman and Freeman is a major reason for that.

Kareem Hunt exploded in his first season in the NFL, and for that reason the Chiefs make this list because Spencer Ware is a very reliable number 2 running back in the league. Kareem Hunt put up huge numbers as a rookie running for 1,327 yards and 8 Touchdowns, catching 53 balls for 455 yards and 3 Touchdowns. Not to mention he played on special teams. Going to throw it out there he didn’t win Offensive Rookie of the Year, that is more of a credit to Alvin Kamara. Back in 2016, Spencer Ware had 1,600 total yards. This is why they make our list of top Duos. 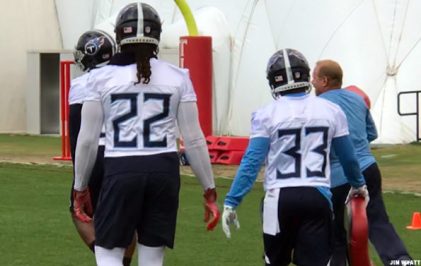 The Tennessee Titans can make some noise in the ground game, going to battle with Mariota and Derrick Henry and former Champion Dion Lewis. I can’t believe the Patriots let him go, oh wait, nevermind that is what the Patriots do. Lewis was probably late for a meeting and Belichick sent him packing. In 2017, Henry ran for 744 yards and 5 Touchdowns, most of his damage coming in the second half of the year. Dion Lewis ran for 896 yards and 6 Touchdowns with 32 catches for 214 yards and 3 Touchdowns. In a Patriots offense, these numbers are crazy for a running back, because he is always playing more than one player at a position.

There are a few honorable mention duos I would like to point out as potential stars in the ’18-’19 season. The Vikings can be a top duo this season with Latavius Murray, but more importantly, Dalvin Cook returns for year 2. His rookie season was a distant memory, being cut short by injury. Cook was projected to be a top running back in the NFL his rookie year last year and Murray has always had the physical tools to be a good running back, we just haven’t seen it yet. This is why I put a giant question mark on these two. 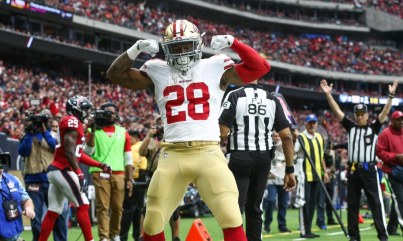 Also, another giant question mark but lets take a look at the Browns RB duo. They have Carlos Hyde and former starter Duke Johnson who would be battling it out. Except they drafted one of my favorite college running backs Nick Chubb from Georgia. Chubb ran in the hardest conference in college but he also took a ton of pounding having played in college for 4 years and 1 major injury. He rushed for 4,469 yards and 44 Touchdowns. Impressive numbers to do that against the quality of defenses in the SEC. Those are NFL caliber defenses he was facing. He’s joining Carlos Hyde, recently picked up from the 49ers and incumbent running back Duke Johnson, who is the top receiving threat out of the backfield. Johnson had 693 yards receiving last year with 74 catches and added 348 more yards on the ground. Carlos Hyde comes over in free agency after nearly rushing for 1,000 yards last year.

The NFL game is evolving and teams are adjusting. In today’s game, a valuable backup option is incredibly important. Beefing up your depth chart is critical. If the Eagles went cheap on their backup quarterback last year, they don’t end that very lengthy Super Bowl drought. Teams are adopting this mindset because they  know the value of having backups that can be starters on some teams. Obviously the biggest team that sticks out here is the Cleveland Browns being in both of my notable Duos. The one thing I don’t think the Browns did was replaced Hugh Jackson, I think with the free agents they brought in, they need a different man leading them into battle. Most of these teams are playoff contenders, valuable backups are relevent of all these Duos.