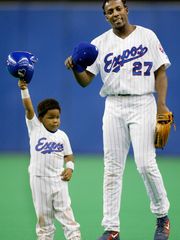 Vladimir Guerrero is a household name in the MLB baseball community. The original Vladdy had a .318 career BA and played 16 seasons in the majors. Guerrero made his major league debut at the age of 21 with the Montreal Expos. Vladdy has now moved over to make room for his son, also Vladimir Guerrero Jr., whom he brought around the ballpark as a little kid. Vladimir Jr. certainly has the MLB pedigree to not be fazed by the glamour and big lights of the Show.

Vladimir Guerrero Jr. is on fire in 2018, and fans have taken notice. They’re calling on Toronto Blue Jays management to bring up the Hall of Famer’s son and 19 year old slugger, sooner rather than later. Guerrero Jr. is batting .431 with 10 home runs and 49 RBI’s in 2018 with the New Hampshire Fisher Cats. He has that similar aggressive swing like his dad did years before him. Vladdy Sr. used to take young Vladdy to games as a kid all the time growing up. He has been around the big lights of baseball stadiums since he was a kid, the moment isn’t too big for him. The kid has swag! However, he is in no rush to jump to the ‘show’.

I’m fine, calm… I just come to the field to give the best of myself every day. Whenever I cross that white line, I try to improve. I’m not desperate. God knows the right time. – Guerrero Jr. to USA Today

Vladimir Guerrero is a name that we will get used to hearing again real soon. One American League scout was blown away recently of Guerrero’s lighting fast bad speed. Very similar to Vlad Sr, one thing is for sure, Guerrero Jr. is far more patient at the plate drawing 18 Walks so far this year, not a lot but more than pops would have had. His dad was the best ‘bad ball’ hitter we’ve ever seen. He used to swing at balls off the dirt and balls up and in. He’d usually make the pitcher pay for pitching around him. Unintentional intentional walks weren’t easy to do against Vlad Sr. An intentional walk was also not a guarantee, he’d catch the pitcher napping by jumping out in front and hammering it somewhere. He would know what to do with those bad balls, usually finding the gap somewhere or even driving it out of the park with regularity. 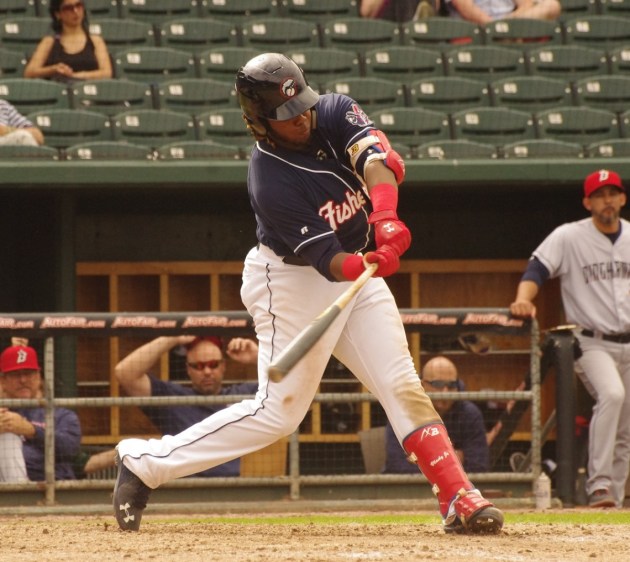 From the late 90’s to early 2000’s Vladimir Guerrero has terrorized opposing pitchers because of his completely open hitting zone and base runners always had hesitations of going 1st to 3rd or scoring from second on a base hit because he had one of the most explosive arms in all of baseball. His son, however, is a 3rd baseman so there is no question he has the arm strength of his father but has better quickness with his feet than his dad had. Fans in Toronto want to see young Vladimir get called up to the big leagues soon, the hype is starting to build after he hit a game-winning blast in spring training. He also went 4-5 in his first start of the spring. Can’t wait to watch the number 2 prospect in all of baseball get the call up.