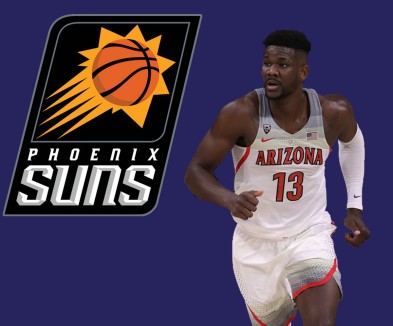 The Suns organization has had plenty of misfortune in its rich history’s existence. The Suns can check one box off this off-season and that is securing the number 1 overall pick in the 2018 NBA draft for the first time. Die-hard Suns fans remember, or have heard of the dramatic coin flip that cost us a few championships. Lew Alcindor, or more notably known as Kareem Abdul Jabbar, was the number 1 overall pick that year (1969) and he went to the Milwaukee Bucks. Had the coin flip been heads, the Suns would have picked 1st and chosen Kareem. Unless you grew up under a rock, you have heard of Kareem Abdul Jabbar and what he means to the history of the NBA. Kareem changed the game from the center position, the Suns are positioned to get another shot at drafting greatness.

He may be the first of the 7-foot backcourt men… He can dribble and make moves that no big man ever made before. Russell could dribble straight down the floor, but Lew can bring the ball down and handle it and give you fakes, and no one his size could ever do that – Teammate Fred Crawford on Kareem

With the NBA draft approaching, there is another player considered to be a ‘generational’ player by many NBA experts. Deandre Ayton, stands 7’1, 260 lbs and has a vertical leap of 40 plus inches. He also has a 7’6 wing span. His measurable’s are off the charts, he has a great mid-range game and he has something NBA ‘bigs’ lack. He’s an outstanding free throw shooter, therefore, he’ll be able to stay on the floor in the final minutes. Most of the top centers in the game like Demarcus Cousins, Karl Anthony-Towns, and Marc Gasol all shoot over 75%. Ayton was also incredibly misused at Arizona as a freshman, alongside another 7 footer Dusan Ristic.

Ayton has only been playing basketball for about 6 years, before that he played soccer while growing up in the Bahamas. His footwork around the rim is NBA ready right now. He has the quickness to be an outstanding defender but right now that is the one area of his game that needs improvement. Most big men improve their defense in the post as they mature and gain the experience. His offensive game is something special, it’s also something we haven’t seen in a very long time. A man who can face up, post up, dunk on anyone, and shoots free throws at a very high percent. He literally has no holes in his offensive game. As a sophomore in high school, Ayton was voted the nations best long-term prospect at the high school level, by Scout.com. He was voted over seniors Jaylen Brown and Ben Simmons, and Juniors like Josh Jackson and Jayson Tatum. Pretty special praise as a 15-16 year old Sophomore.

Back in 1969, there was another 7 footer that was set to go number 1. He was also considered by many to be a once in a lifetime type of player. unfortunately, a coin flip cost us the all-time leading scorer in the NBA and the inventor of the sky hook. Kareem Abdul Jabbar changed the position and brought championships to the Bucks and Lakers. Deandre Ayton is hopefully that next ‘can’t miss’ type of player that turns the Suns around. Put him next to Devin Booker and Josh Jackson and the Suns have some scary young pieces that can grow together. This is going to be the next ‘big 3’, except they’ll be home-grown, through the draft.

2 thoughts on “NBA Draft: Suns Have a Second Chance At Drafting Greatness”