It was March 19, 1969, the year the Suns took one of the biggest blows in franchise history. It was the coin flip heard around the world. The Suns lost a coin flip to the Milwaukee Bucks costing them at least one championship, maybe more. They let the fans in Phoenix pick heads or tails in a poll in the newspaper. Jerry Colangelo wanted the fans to share in the win or the loss of the coin flip… It was such a monumental, once-in-a-lifetime flip of a coin, why not let your fans be a part of that? The fans chose heads, costing them arguably the most dominant center of all-time and the creator of the sky hook. Lew Alcindor or as you might know him Kareem Abdul Jabbar was the number 1 overall pick in 1969. If it were to be heads, the Suns would have had Kareem next to Dick Van Arsdale and Hall of Famer Gail Goodrich. Clearly, Suns fans are still pretty salty about how things have turned out for us in our rich history. Especially since, at the time, Kareem would have preferred to play in Phoenix.

Probably… The weather’s a lot better. And my good friend Connie Hawkins ended up there- Kareem Abdul Jabbar on Being Asked if he’d rather have been drafted by Phoenix

This marked the beginning of an era for Suns fans. An era of turmoil and disappointment on draft day. Suns have had a lot of success over the years, that success doesn’t include the draft or draft lottery. They have the 5th All-Time highest winning percentage. It is about time the basketball Gods start looking out for our Suns and bless them with the number 1 overall pick. Suns are long overdue.

Since 2000, the Suns haven’t had much luck outside of drafting Amare Stoudemire in 2002 and Devin Booker in 2015. They traded the rights away to Luol Deng in 2004 and also passed on Andre Iguodala that same season. Traded the rights to Rajon Rondo in 2006 and also passed on Kyle Lowry that same season. In 2013, they passed on dynamic guard CJ McCollum, who is having a nice career next to Damian Lillard in Portland and Giannis Antetokounmpo A.K.A the Greek Freak. At least 14 teams also passed on Giannis. In 2011, they had the chance to take a pretty good two-way guard out of San Diego State named Kawhi Leonard. They took Markieff Morris instead, worked out real well for them. Now they have a 60+% chance of getting the top 3 pick in this year’s draft, if you ask any true, die-hard, Suns fan, they’d tell you if we didn’t get the top pick this year, it’d be a giant conspiracy. 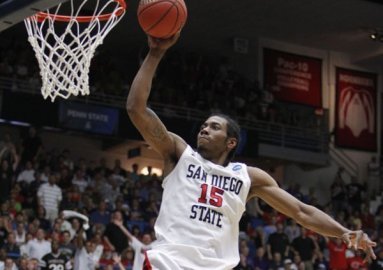 The Phoenix Suns, were once the hottest ticket in town for AZ residents but the decline and poor draft day decisions have Suns fans restless and wanting ‘change.’ We’ll see how Josh Jackson pans out he is still very young but he shows a ton of promise. Charles Barkley, Dan Majerle, Kevin Johnson, and Steve Nash all put their mark on this franchise and Devin Booker is the new face of the franchise and has to help get the Suns back on track. That, and some better luck in the NBA draft and a better lottery structure would be nice.

Suns have their coach of the future in Igor Kokoskov and are primed to at least get a top 3 pick, 64% chance to be exact. Everything can change with one pick though. Will it be this year? All it takes is that one pick that can turn the fate of a franchise. Let’s hope that it is this year. New coach new mindset in the Desert.

2 thoughts on “NBA Draft: The Coin Flip That Set The Suns Back Decades”