For NBA fans, we have the match-up we want. The Golden State Warriors are looking to retake the West from the Houston Rockets and I don’t think Kerr and the Warriors fear the beard too much. The amount of talent in one series is ridiculous. Mike D’Antoni has been on this stage before so it is not new for him, but now he is all out of excuses. He has the team to do it now. The Rockets have arguably the best player in the league this year in James Harden and a rim protector on defense in Clint Capela. Oh yeah, they also have 8 time all-star Chris Paul to play along Harden. The Warriors have the two championships to go along with the 3 MVP awards for Durant and Curry. 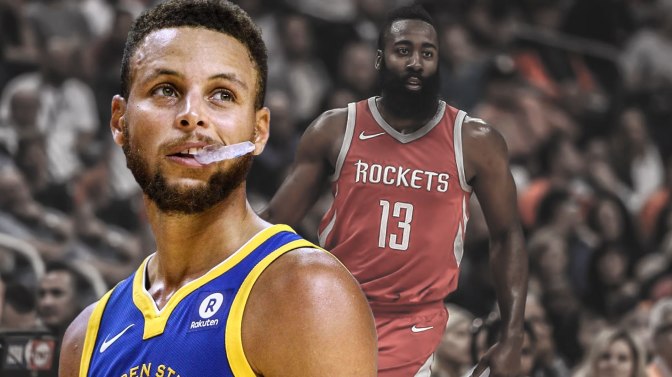 The Warriors have experience on their side as well and that winning pedigree. Houston has had chances to dethrone the Warriors in recent years, but Curry and Kerr have had other plans. The Warriors have a total of 23 all-star appearances and 3 MVP awards on their roster. Including 9 All-Star games for Durant, 4 for Klay, 5 for Steph, and

Andre Iguodala, David West, and Draymond Green add 5 more. They also have a total of 3 MVP’s, one from KD and 2 from Steph. Factor that in with 2015 coach of the year, Steve Kerr, who also adds 5 championships as a player. That is a lot of playoff experience and all-star fire power on one team. The Rockets better be on their game to show they deserve to be the number 1 seed in the very wild, wild Western Conference.

Houston is tired of hearing about the Warriors. They’re the top seed but somehow still get treated as the underdog against the Dubs. The Rockets have the top offensive minded coach in the NBA, Mike D’Antoni, and I don’t think there is a coach that wants to prove  everyone wrong more than D’Antoni. D’Antoni has often been criticized for his offensive heavy teams not being able to win in the playoffs. They’ve been in the Warriors shadow for a few years now and Harden and his beard would love to knock them off. The Rockets finished with the best record in the NBA this year and are the scariest offensive team in the league when Harden and Paul are in sync. They have the talent to match-up with the Warriors. They have a combined 21 All-Star appearances, 6 for Harden, 8 for Paul, and 7 for Joe Johnson. They obviously lack the only thing that matters for Harden, Paul, Johnson, and D’Antoni, and that is a Championship.

There aren’t many innovators in coaching… There’s usually a few key figures who change the way everybody else thinks … I think what makes Mike unique is he is one of those innovators. – Steve Kerr to Business Insider about D’Antoni

This is one of the most evenly matched series this year, as fans, we can only hope this lives up to the hype. This will be a much more entertaining series than the actual finals. As either one of these teams should be able to take down Boston or Cleveland. West coast is the best coast in terms of NBA competitiveness hands down. This series should prove that to be very, true. The Warriors have some hardware, it’s time James Harden, and his illustrious Beard, finally wins the Championship for Mike D’Antoni and the city of Houston. An MVP would also be nice for Harden, he’s been snubbed on that one a few times as well.