Let’s take a look at some of the players taken day 1 of the NFL draft. Plenty of story lines to choose from. We’ve never had 4 quarterbacks selected in the first 10 picks before, with a total of 5 QB’s taken on the first day. Lamar Jackson being selected by the Ravens concluded the first round. There are 3 picks that separate themselves from the rest in the first round. 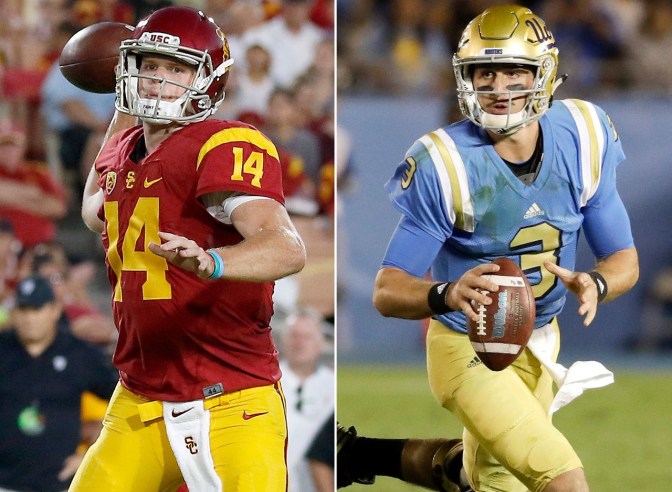 Biggest steals in this draft start with Josh Rosen. Rosen is arguably the most NFL ready prospect and gets a chance to play with pro-bowl RB David Johnson, who is coming off an injury, and future Hall of Fame WR Larry Fitzgerald. ‘Fitz’ is the best player to have with a rookie QB, he is a everything a ‘pro’ should be. He’ll be a great asset for Rosen, especially since he is still hauling in close to a 100 catches a year. Steve Keim continues to be a special GM. He only had to give up a 3rd and 5th round pick to get him. Getting their franchise QB at 10 is a home run.

I’m more motivated than ever. I’m determined. Honestly, I was pretty pissed off as I saw teams going by, passing on me- Josh Rosen After Being Drafted 10th

The Chargers getting S Derwin James out of Florida State at number 17 was very shocking. Gus Bradley, the creator of the Seahawks ‘Legion of Boom’, will have a lot of fun with James. Derwin James was the top rated safety in this draft and has pro-bowl potential from day 1. Put him in his Gus Bradley’s defense and we have a Cam Chancellor 2.0, a big, hard-hitting safety who actually has better cover skills than Chancellor did. James was projected to go in the top 10, getting him at 17 is a robbery and fills a need with free agent safety Tre Boston feeling out the open market. With James coming in, that is no longer a priority.

Swiss Army knife at the second and third level of the defense. Probably best in the strong safety type role although he does have the burst to range from center field to make plays near the boundary. Can be high-volume tackler in NFL. Effective blitzer. – Chris Trapasso, NFL Draft Analyst

Then we have the New England Patriots, who take one of the best RB’s available in Sony Michel out of Georgia. This automatically becomes a steal because we’re talking about Bill Belichick, there is no doubt that he will make Michel an absolute threat in the Patriots scheme. Michel is a bruising, physical RB out of the SEC that constantly faced NFL-type defenses every week, and he produced at a very high level. 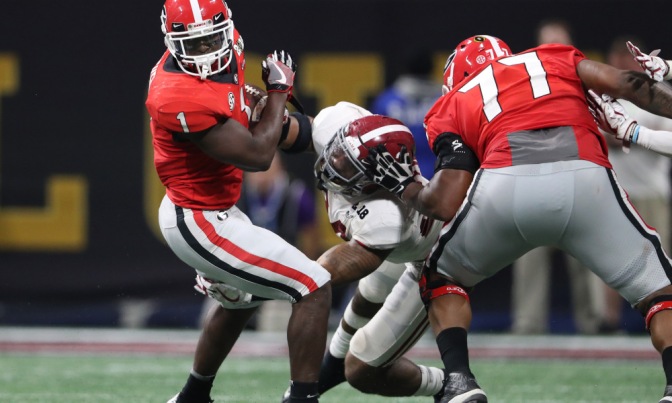 There is some ‘bust’ potential in this first round. Starting with Baker Mayfield, a 6’0 QB, who is a gamer and a big play, accurate QB but don’t think he was worthy of being the number 1 overall pick. He doesn’t have the prototypical size to be an NFL QB, however, there are exemptions to that rule with Russel Wilson and Drew Brees. Naturally, being the number 1 pick you’re always going to be the first potential candidate to be a bust.

The Saints pulled off a bit of a surprise by trading away two first round picks for taking Marcus Davenport, the DE out of UTSA. He’s definitely a surprise, but these scouts are better at spotting talent than me, so we’ll see. Playing at UTSA puts him at a disadvantage from day 1 because of the lack of competition in college. However, he does have the skill set to compete in the NFL from day 1.

The last one, Seattle Seahawks taking Rashaad Penny, who I loved as a 3rd round pickup for a team. Seattle reached on Penny instead of addressing the needs. For instance, the legion of boom is falling apart so defense was a key area of need. They do have a need at RB, but there was Chubb, Michel, and a few other RB’s were still on the board. Not sure the mindset here because Penny lacks NFL size and strength to be an every down back. Although he did have a storied college career, the NFL is a different beast all together.

He’s a nice runner, but they have so many other needs and there are better backs. Weird. – Pete Prisco, CBS NFL Writer

The transition from college to the NFL is daunting. It is no guarantee that any of these players become stars. There are many top talents that can fall victim to the injury bug or receiving all that money causes them to be irresponsible. Lots of risks come with rookies but it’s all part of the maturity process. Time will tell on top talents such as Sam Darnold, Shaquan Barkley, Bradley Chubb among many others.

2 thoughts on “NFL Draft: 1st Round Busts and Steals!!”