There are a lot football fans in LA that are up for grabs right now and the Chargers and Rams are both trying to win it over. Rams have the edge right now because they have already been in LA, so have the Chargers but 1960 doesn’t count. The Chargers were close enough to LA to have enough of a following but not on the Rams level. The city is up for grabs and the first few years are crucial in the “battle of Los Angeles”!

There are a lot of people in this area that have grown up without a team here and who have kids, and those kids grew up rooting for other teams. So there are a lot of families here looking for a team to root for and to follow and support, and there are millions of people who live here, so through USC football and Rams football and Chargers football I think there’s plenty for everybody. – Chargers GM Tom Telesco

After an 11-5 record and playoff appearance, the Rams have the early advantage over my beloved Southern Cal Chargers (yes I just said “Southern Cal” Chargers, not LA chargers…it’ll always be SD to me) in the battle for Los Angeles. These two teams will have a chance to let it rip week 3. However, the first month of the season there is still a lot of uncertainty about the true “identity” of your team. You can’t take much stake in September football games. Look at the Chargers last year, they started 0-4 and finished 9-3. Ended up missing the playoffs to the BILLS, the BILLS! The Chargers beat the Bills 54-24, the reason I say this is the Chargers missed the playoffs by one game. Guess who took that final playoff spot? Yup, the Bills! You can’t expect to start 0-4 and make the playoffs, no one is to blame except for the Chargers. The point being, you aren’t the same team in September as you are in December and January.

Jared Goff isn’t on the same level as Philip Rivers, yet, at least. His numbers were better but when it comes to recognizing defenses and making the right decision, Rivers would school Goff all day long. Goff had an outstanding second season throwing for 28 TD’s and 7 INT’s.  Melvin Gordon and Todd Gurley were both selected in the first round of the 2015 draft and remain close friends. Gurley has been more productive in the first 3 seasons. Each defense has a young, face of the franchise type of player, Joey Bosa and Aaron Donald. The Rams and Chargers each had first year coaches last year in Anthony Lynn and Sean McVay. These two teams are very well matched, however the Rams had a busier free agency and are deeper than the Chargers, whereas, the Chargers focused on resigning key members of last years team and a few free agents.

The Rams went “All-In” this free agency by picking up former pro bowl corner back Aqib Talib and one of the best young talents in the NFL, CB Marcus Peters. They also brought in Ndamukong Suh to play next to the Defensive Player of the Year, Aaron Donald. This defensive talent and Wade Phillips “The Defense Whisperer”, this is one of the scariest defenses you’ll see in the NFL. 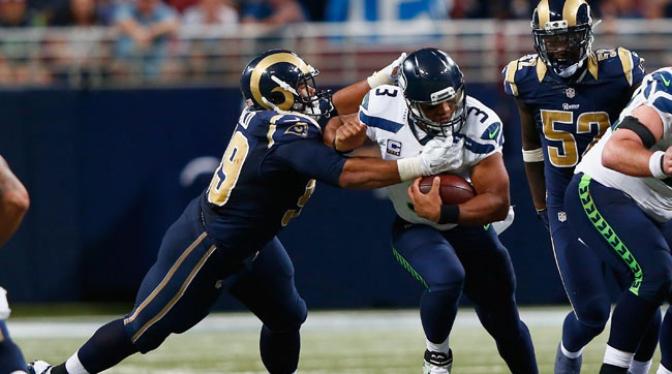 The Chargers are only a few pieces away from being Super Bowl elite, but the window is much smaller. Rivers has 8 kids and in his late 30’s, how does he still look like a 21 year-old kid out there? Playing with 8 kids all the time must rub off on him because there is nobody having more fun that Rivers. He has started 192 STRAIGHT games 4th all-time. They did make a key pickup to benefit Rivers and that is the addition of 3 time pro-bowl center, Mike Pouncey. Rivers was sacked a career low 18 times in 2017 so having Pouncey, a lineman with a mean streak, will only prolong Rivers career. The biggest weakness for the Chargers was the 3.9 yards per rushing attempt last year. Nobody will benefit more from Pouncey being in the middle than Melvin Gordon.

The only thing on the line here are bragging rights. The two teams aren’t in the same division, so the game really has no meaning other than holding the “inner city” crown! Right now, the Rams are winning this battle, but a lot can happen in a year. What will Jared Goff and Sean McVay do for an encore in year 2 together? How will the Rams newly acquired free agents on defense play together? How will Pouncey help the Chargers rushing attack? How will Keenan Allen follow-up last season’s epic season? There are a ton of different story lines in LA to watch out for in 2018 and it fires me up!